Tre Moore, a former Rebel gridiron star, currently plays defensive end for Georgia State and is having a lot of fun in the process.  His most memorable moment so far was the “environment of the Tennessee game” when his team upset the the Volunteers earlier this season.  Tre, who is interested in being a chiropractor, still has to keep up with academics. But, he stated, “Strom Thurmond did a great job preparing me and I stay on top of things by making a list of all the assignments due for the semester.” Along with academics, he has football practice every morning, except on gameday.  Tre noted that the main difference in football from high school to college is the “speed of the game.” His goals for this season are “to win the conference and make a bowl game.” Tre added that he “misses everything about Thurmond”. If you follow him on social media, you know he is a big dancer. So, I had to ask, “Why do you dance?” His response was, “It’s hard for me to sit still so why not go crazy with it.” Tre Moore is a true next level ST Rebel and is representing Thurmond in a great way. 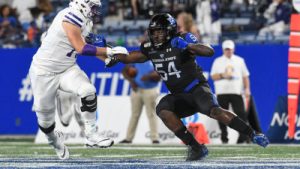